Dwarves in Space By S.E. Zbasnik 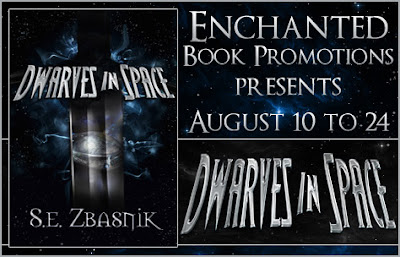 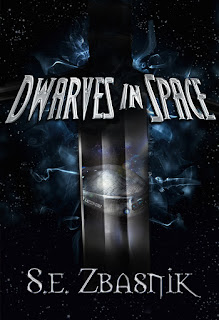 Thousands of years after the jewelry's destroyed, the sword reforged, the dragon ridden, and the indecipherable prophecy translated into a recipe for sugared biscuits, the dwarves turned to that final frontier: space. And along came the elves, orcs, gnomes, trolls, ogres, and those vermin-like upstarts, humans.

Dwarves in Space is Tolkien merged with Hitchhiker's Guide to the Galaxy in a horrific transporter accident.

The Elation-Cru is not the flashiest ship, nor the newest, or even has all of its bolts attached; but she can fly. Well, sort of wade through space, and that's when all the parts are working. She supports a sugar addicted dwarven pilot, an elven engineer, an orcish doctor, a silent djinn, and the lone human trying to hold the entire thing together with duct tape. Variel, the captain, has been hiding from a secret for the past five years and time's finally run out.

When she goes against her common sense and fights to save her onboard assassin/renter from a job gone sour, she finds herself before an ex-colleague that knew her in her previous life as the Knight of the realm. The entire ship is sent on a mad dash across the universe -- from a decaying space station, home to the wackiest species the galaxy has to offer, down to the Orc homeworld, which wouldn't be so bad if Variel hadn't spent most of her previous life fighting in the war against them. Chances of survival are nil and slipping fast.

Author Bio
S. E. Zbasnik has a degree in genetics, which means there may or may not be a horde of monkeoctopi doing her bidding to take over the world. Bringing that scientific approach to the fantasy world is her game, trying to put some common sense into magic and magic into common sense.

She currently lives with her husband and beloved dog, who dress up like Sherlock Holmes and solve mysteries in their spare time. She spends nearly of all her time in Nebraska but that's because it is impossible to leave without finding the lamppost. She lives in a house that has at least four walls and there are some other souls wandering forlornly calling to their lost lives within.

She's a huge video game nerd especially for Dragon Age, Mass Effect, and Bioshock as well as Doctor Who and makes fan art in her down time.

She's a neutral good assassin, so it's best to not get on her bad side.


“Eclipse 5, this is the Elation-Cru looking for a docking number. Please respond,” Variel rolled her neck back, trying to blink away the last of her sleep. If this weren’t the heart of “the safest ports in the galaxy” she’d probably be nervous about the quiet comms.

“Eclipse 5?” She continued before turning back to Orn, who lifted his massive shoulders and slipped another boot overtop his first. He’d pull out his PALM and start playing Spacecolony if the boss wasn’t staring right at him. “I say, is anyone there?”

“We have coin?” Orn threw out.

The static popped and a voice, higher pitched than was typical for most organics, screeched across the flight deck, “This is Eclipse 5, oh bloody hell! Who let those little brats in here to dick with the controls?” some shuffling drifted across the space, a few pops answered back, and the voice returned much less like a rodent freebasing helium, “We have you on sensors, Elation-Cru.”

“Sensors,” Orn snorted, “look out a bleedin’ window and we’ll wave back at ya.”

“Docking port 75-C is open. You’ll be in the Happy Jellyfish lot,” reported the man who was probably wiping sticky chocolate off his control panels.

“Joy of joys, we get to be a spineless blob of tentacles.”

“Right, fine, uh,” the dwarf flipped the switch back, “This is Elation-Cru, Ecstatic Jellyfish, got it.”

“That’s Happy Jellyfish,” the weary voice stressed, “I see you’re registered with the dwarven embassy. A proper customs officer shall be out in an hour.”

“Right, Happy Jellyfish over and out,” Orn mocked, flicking off the channel and punching in a few numbers. Docking was fully automated after one too many rich snots got wasted on Lavabombs while skittering about the galaxy in Leap-pods that somehow always wound up in the main director’s lobby, the lady decals ripped to her nude waist. Pilots needn’t bother with parking, but Orn liked to appear busy.

Variel sighed, this part of the galaxy made her itch. The surest way to snap was waking every day with forced joy and a shit eating grin. She laid a hand on the dwarf’s shoulder as she leaned down to him, “Wake the others, I’m sure the twins have some unholy business they’ll be getting to.”

“What about her?” Orn asked, his eyes flickering to a smashed bulkhead that someone refused to repair on principle.

“Are you two…again? Fine, I’ll talk to her. Gods know there’s got to be something broken on this ship that’ll cost all our money to repair.”

Orn smiled, his overlarge eyes twinkling as he broke the comfortable silence of the ship by powering up the automated wake-up call. A charming cackle of a rooster bounded about the ship as bouts of twinkling music followed. The lilting, cheerful voice — certain to have driven entire systems of people to utter madness — chimed in, “Wake up sleepy heads! There’s a big day ahead of you among the stars!”

The fact that everyone despised the thing with enough furor to power the ship across twelve light years encouraged Orn all the more to use it every chance he got. As Variel turned to leave, most likely to put on something that wasn’t wearing to the point of being see through, the dwarf cheerfully called out, “Captain off the bridge.”

She flipped him off before the doors could close.

Win a $10 Amazon gift card during the tour.