Revelations From Outside the Box 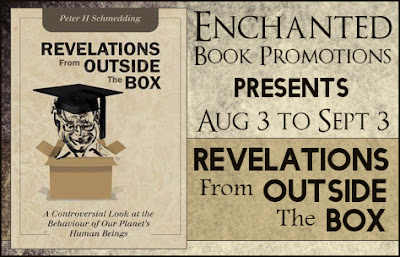 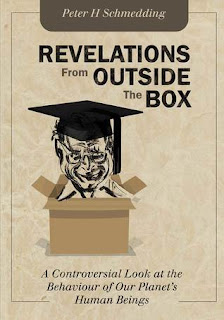 About the Book
Title: Revelations from Outside the Box
Author: Peter Schmedding
Genre: Mind, Body & Spirit
How often do we wish we could say what we really feel in our guts? Do we ever feel free from restraints that stifle our true emotions and thoughts into oblivion? How long will we remain in denial of the effects of our evermore toxic world?
Revelations from Outside the Box brings into our awareness the unknown traps that secretly compromise our view of reality, undermine our conversations and ever so often lead to disagreements and hostility.
This book questions what we perceive and accept as reality. Relating a string of events that were observed in real life report factors, although they are the causes of untold, needless suffering, that we commonly ignore.
In the introduction to Revelations from Outside the Box we already get a glance of what the book is trying to tell us. An episode shows how a family of three people live in the same household and, by closer examination, in the way they see each other are miles apart. It also suggests how a simple adjustment not only prevents such estrangement but rather fosters a sound and productive relationship, in this case, between father and son.
Beyond the primary purpose this book describes certain arcane happenings of the human mind. It asks the question, could it be that there is a wellspring of wisdom that could benefit us all? A hypothetical time travel over a couple of hundreds of years gives us yet more food for us thinking outside the box. 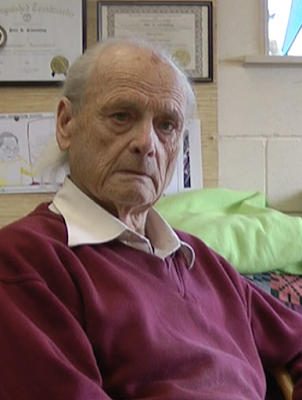 After working in the media for 25 years, Peter Schmedding retired and for another 25 years devoted himself to children’s preparation for adulthood. This fulfilled his lifelong dream to give to the young the nurture and support that he never received during his growing up years. Paradoxically, it was Peter’s emotionally and academically impoverished childhood that taught him, from the inside out, how such neglect damages the personality. Later in life Peter studied different philosophies of mental health and psychotherapy. He worked as a counsellor for many years. He lectured and presented papers on respective topics locally and overseas. Now, in his advancing years, he writes from personal experiences in a long and adventurous life.

Atoms and the Universe:
https://www.youtube.com/watch?v=rS57OtyzBX0

The News. A speech at Toastmasters:
https://www.youtube.com/v/N7QcJ3KbuaA

In Conversation with Susan Hampshire:
https://www.youtube.com/watch?v=fTJVBbn3FxQ

Peter at the Organ playing his Interval:
https://www.youtube.com/watch?v=PheBYRZvha8

The Galileos of our time.  In 1610, Galileo Galilei, an Italian astronomer published his findings that the earth moves around the sun. With the aid of an improved new telescope, he had gathered the evidence by observing the phases on Venus and the moving moons of Saturn. This supported without doubt the earlier discoveries of Polish astronomer Copernicus.
At that time, the idea that the sun moved around the earth, which was then considered the centre of the universe, was an accepted fact. It crashed head-on with Galileo’s model. Religious authorities saw this as an opposition to the Holy Scriptures, and in 1633 called Galileo before the inquisition, and accused him of heresy. Consequently, Galileo had to withdraw his findings and was confined to house arrest for the remainder of his life.
History has a habit of repeating itself.
Not so much behind closed doors as behind closed minds a revolution is taking place. It puts a new understanding on everything that concerns our beliefs, consciousness and reality. Previously, rather unknown names joined the ever-growing numbers of scientists, thinkers and innovators threatening to upset our common worldview. This may introduce a new paradigm into the fate of mankind altogether.
“The universe is a symphony of vibrating strings,” declared quantum physicist D. Michio Kaku. Professor Brian Greene, a theoretical physicist, wrote a 400-page book on String Theory, a theory that promises to become the most prominent theory since General Relativity. He explains how the Hadron Collider might one day reveal that string theory with its extra dimensions is supported by evidence. Dr John Hagelin, a particle physicist, explains how we are all connected, reminding us of Carl Jung’s Universal Unconscious.
The insights of this revolution lie within the subatomic field and, therefore, as a rule most of us are not able to acquire the relevant knowledge by ourselves. We have to trust those who have spent their lives investigating such factors. Then it is up to us to take it on trust or discard it as nonsense. Either way this is how we create our reality. Looking further ahead, however, this new understanding would blaringly expose the absurdities, the tragedies—accepted realities at this time in history—that feed headlines around the globe. Furthermore, it would expose the irresponsible behaviour of our planet’s self-proclaimed most intelligent beings, the human race.
We cannot expect this new worldview—or rather consciousness view—to take a foothold in society in the near future. It is unlikely to be accepted until future generations take hold of it.