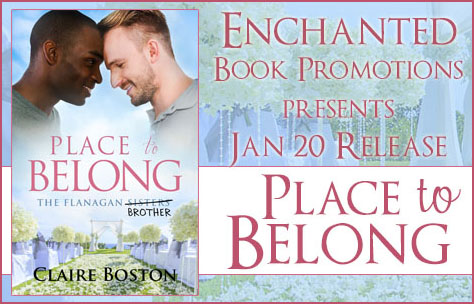 Title: Place to Belong
Author: Claire Boston
Genre: Contemporary Romance
Sean Flanagan has spent a lifetime alone and rejected, constantly hiding who he really is.
With a father who deserted him and a mother who despised him, Sean didn’t think things could get much worse … until he was kicked out of home for being gay. Now he’s discovered he has three half-sisters on the other side of the world. This might be his last chance to find people who will love and accept him. But he’s terrified that if they find out who he really is then they’ll reject him like the rest of his family.
Sean arrives in Houston and is stunned by the warm welcome he receives from his sisters. He begins to hope that maybe this time things will be different. That’s when he meets Hayden Johnson. To follow his heart means risking everything with his newfound family.
Hayden is tired of endless dating. He’s looking for a man to love, someone to spend the rest of his life with. His boss’s new brother ticks all the boxes on the attraction scale, but there’s just one problem – he’s not gay.
Will Sean let his fears rule him, or will he let in the chance of love and find a place where he belongs?

Claire Boston is the best-selling author of The Texan Quartet. In 2014 she was nominated for an Australian Romance Readers Award as Favourite New Romance Author.
Her debut contemporary romance novel, What Goes on Tour caught the attention of Momentum’s Joel Naoum when her first scene was read aloud at the Romance Writers’ of Australia (RWA) conference in 2013. This led to a four book contract for The Texan Quartet series.
Claire is proactive in organising social gatherings and educational opportunities for local authors. She is an active volunteer for RWA, as a mentor for aspiring authors and the reader judge coordinator.
When Claire’s not writing she can be found in the garden attempting to grow vegetables, or racing around a vintage motocross track. If she can convince anyone to play with her, she also enjoys cards and board games.
Claire lives in Western Australia, just south of Perth, with her husband, who loves even her most annoying quirks, and her grubby, but adorable Australian bulldog.
Contact
Please email Claire with any questions claire@claireboston.com
Social Networks
Website: http://www.claireboston.com
Blog: http://www.claireboston.com/blog
Reader Newsletter: http://eepurl.com/Z4-4z
Facebook: http://www.facebook.com/clairebostonauthor
Twitter: http://www.twitter.com/clairebauthor
Pinterest: http://www.pinterest.com/clairebauthor
Goodreads: http://www.goodreads.com/clairebostonauthor
YouTube: https://www.youtube.com/channel/UCe9YKmz-ORDtYaNG17hM5BA