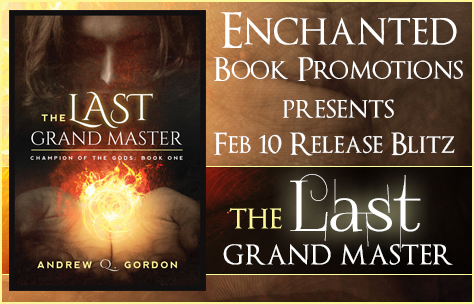 What’s better than discovering a new fantasy series to devour? Getting the first book free! I’m excited to offer, The Last Grand Master, book one in my Champion of the Gods fantasy series, as a free download by signing up for my monthly newsletter. If you love free eBooks as I do, you’ll want to keep subscribed to my newsletter because other sci-fi/fantasy authors will be giving away free eBook downloads via my newsletter throughout 2017.
Subscribe here for your free eBook download and get started today: http://aqgsignups.getresponsepages.com
Title: The Last Grand Master
Author: Andrew Q. Gordon
Genre: Scifi / Fantasy
In a war that shook the earth, the six gods of Nendor defeated their brother Neldin, God of Evil. For three thousand years, Nendor and the Seven Kingdoms have known peace and prosperity and Neldin’s evil was nearly forgotten.
But then Meglar, wizard-king of Zargon, unleashes the dark magic of the underworld and creates an army of creatures to carry out his master’s will. One by one, the sovereign realms fall as a new war between the gods threatens to engulf Nendor.
Leading the opposition to Meglar is Grand Master Farrell. Young and untried, Farrell carries a secret that could hold the key to defeating Meglar—or it could destroy the world.
Farrell is joined by Nerti, queen of the unicorns, and Miceral, an immortal muchari warrior the Six have chosen as Farrell’s mate. As Farrell and his new allies make plans to counter Neldin’s evil, Meglar forces their hand when he invades a neighboring kingdom. Rushing to help their ally, Farrell and Miceral find themselves in the middle of the battle. Cut off from help, Farrell attempts an untried spell that will either turn the tide or cost him and Miceral their lives.

Andrew Q. Gordon wrote his first story back when yellow legal pads, ball point pens were common and a Smith Corona correctable typewriter was considered high tech. Adapting with technology, he now takes his MacBook somewhere quiet when he wants to write. Andrew’s imagination has helped him create works of high fantasy, paranormal thrills and touch of the futuristic.
To find out more about Andrew, follow him on his website or on Facebook.
website: www.andrewqgordon.com
Facebook: www.facebook.com/andrewqugordon
Twitter: https://twitter.com/AndrewQGordon