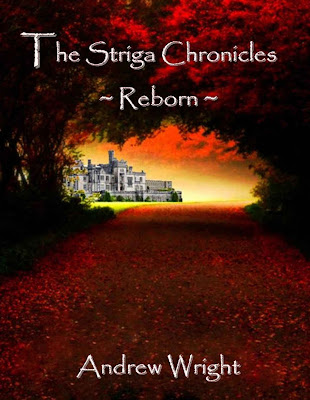 Title: Striga Chronicles - Reborn
Author: Andrew Wright
Series: Striga Chronicles - Book #1
Genre: YA/Paranormal
Publisher: Self-Published
Release Date: March 30th
Editions: e-Book and paperback available July 22, 2013
Blurb/Synopsis:
Growing up in 18th Century England, Elizabeth's privileged life left her in need of nothing but wanting for more. As a plague sweeps across the country taking those closest to her, she realizes her world is not as safe as she once thought. No longer under the protection of her family, she discovers the Striga, a race of supernatural humans and their enforcers. Their hidden agenda forces Elizabeth to flee from the only home she's ever known in search of answers.

Along with her protector William, Elizabeth must adapt in order to survive, while hoping to discover the truth behind the Striga's vicious attack on her home. As the lies unravel around her, she realizes that her life has been planned from birth and her ties to the Striga go much deeper than she thought possible.

On the eve of her wedding, Elizabeth confronts her human memories head on in order to resolve a past that should have been long forgotten. It is only after she retells the story that she can finally realize her full potential and become who she is destined to be.