Everything Between Us Mila Ferrera Excerpt~Spotlight 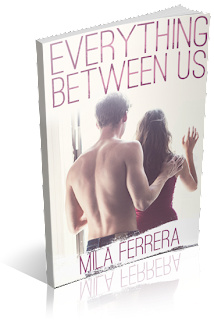 by Mila Ferrera
Daniel’s got everything figured out. He makes a good living as an artist ... mostly through offering "private shows" to the wives of local wealthy businessmen. He never stops playing the game and never lets anyone touch his heart. But when his current fling offers him a few hundred an hour for art lessons for her reclusive, college-dropout daughter, Daniel finds himself forgetting his own rules. The girl is rude. Insulting. Incredible.And she sees straight through him.Stella is hiding from the world, not because she wants to, but because crippling panic attacks await her every time she tries to live a normal life. She's determined to push everyone--including her handsome new art teacher—away. But Daniel makes it utterly impossible. The guy is irritating. Mocking. Magnetic.And makes her want things she knows she can never have.What starts as a battle of wills turns into passion, where giving in means facing the things that scare them most.

Stella’s being forced to take “therapeutic” art lessons by her mom. And all Stella knows about Daniel, her teacher, is that he’s her mom’s latest fling …

Daniel looks around the insulated porch room, with its walls of windows. “Great light in here,” he says to my mom. He’s got a large pad of paper tucked beneath his arm and is carrying a metal toolbox. A beanie is keeping his hair off his forehead, but messy waves peek out behind his ears, curling against his neck. He’s wearing another pair of paint-stained jeans and a t-shirt under a flannel button down.
I can see why my mom is attracted to him. Nice shoulders, lean hips, and taller than she is, which is more than I can say for my dad. Daniel’s not my type, though. Not that I have a type. But if I did, he wouldn’t be it. Not at all.
Daniel sets his toolbox down, then turns to me for the first time. His striking blue eyes are full of friendly curiosity. I almost feel bad for what I’m going to do. “Ready to get started?” he asks.
I hike a smile onto my lips. “You bet.” I glance over at my mom. “Thanks, Mom. I’ll be fine.” If she stays here, she’s going to cramp my style.
Mom watches Daniel place the sketchpad on the heavy oak table in the corner of the room. “If you need anything, I’ll be downstairs in the gym.”
He nods without turning around. As soon as she’s gone, he says, “So, have you ever taken an art class?”
“Not since elementary school. I’m not very visual.”
“You were certainly enjoying the view when we came in.”
He’s right, which fuels my annoyance and makes it easier to enact my plan. “Yes, I have eyes. And it’s amazing—they send signals to my brain, and my brain translates them! Green. Grass. Hills. You. Thinking you know something. About me.”
His genial smile freezes. “It was just an observation.”
“Is that what my mom’s paying you for? My mistake. I assumed it didn’t have anything to do with your intellectual firepower.”
He lets out a laugh and shakes his head. “Okay.”
And then he opens his toolbox and pulls out a few pencils, like what I actually said was, “I like to draw.”
“I figured we could do some simple sketching and composition stuff first,” he says, gesturing toward a chair at the table.
I don’t move. “Do you draw my mom in the nude? Just wondering.”
He sits down in the chair and hooks his ankle over his knee, then leans back, all relaxed. “Is that something you’re interested in? I’m happy to provide a model if you’re into nudes.”
My cheeks burn. That was not what he was supposed to say. And now I’m picturing him naked. “I’ll pass, thanks.”
“Human figure drawing is a good, basic skill. I’m just saying. I mean, I figured we’d start with all our clothes on, but you’re the boss.” The corner of his mouth twitches. He’s having fun.
I hate him. “I thought my mom was the boss. She’s the one who’s paying you to service her.”
His eyes are bright with amusement. “Right now she’s paying me to service you.”
My mouth drops open. “Oh … ew.”
“I was referring to this, Stella,” he says innocently, holding up a pencil and the sketchpad. “What did you think I was talking about?”
Anger flares in my chest. “The fact that you’re a brainless man-whore who’s leeching cash off my mom—and probably other desperate, lonely women—instead of getting a real job?”
Direct. Hit. His jaw tightens and he lowers the pencil and sketchpad to his lap. “Did I do something to offend you in another life?”


“Your existence in this one is sufficient.”

Mila Ferrera lives in New England, where she has a family and a job and does various normal, everyday things, all while plotting novels in her head. She has a passion for writing new adult/adult romance featuring psychological twists and tortured heroes. Her own psychology internship involved plenty of consultation, but alas, no sexy Swedish doctors, and her decision to make one up is what sparked her self-publishing adventures. She’s the author of SPIRAL (available now), ONLY BETWEEN US (9/3/13), and EVERYTHING BETWEEN US (11/5/13).
Posted by Cindy Gilleland at 4:30 AM