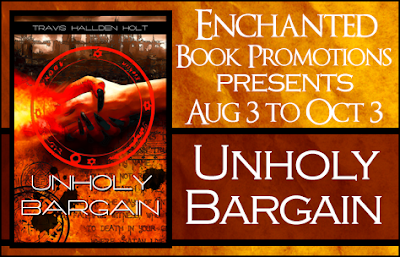 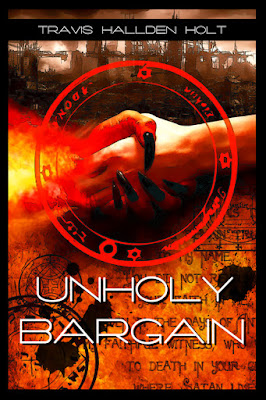 Title: Unholy Bargain
Author: Travis Holt
Genre: Supernatural Thriller
An assassin is at work—one of the best in the trade. His body turned to dust long ago, but his spirit roams the Earth freely, undetectable to the five senses. He stalks his victims waiting for just the right opportunity. Then, in quick succession, he possesses a human host and strikes down his quarry. For a century and a half he has served this way.
Deputy Sheriff Nate Barrington is riding the crest of a new relationship. Kaitlyn Spencer is beautiful, altruistic, enlightened—everything he's not. She teaches classes in New Age philosophy at her growing school. Nate doesn't share her spirituality, but the physical passion hasn't subsided enough for him to care.
Nate's nirvana quickly unravels when Kaitlyn's life is threatened on two separate occasions. With no apparent motive or any evidence suggesting collusion, the police are stumped. Even more troubling to Nate, Kaitlyn is eventually convinced she is the target of unseen forces.
A hardheaded pragmatist, Nate isn't prone to believe that spirits can possess people. As far as he's concerned, Kaitlyn's claims of perpetrators possessed by a spirit assassin are on par with comic book stories and have nothing to do with reality, and her esoteric, New Age mumbo jumbo begins to drive a wedge into their relationship. And why Kaitlyn? What secret is she hiding?
Even with the sheriff's resources at Nate's disposal, the odds for Kaitlyn's survival are not in her favor. The true enemy is virtually invisible, and Nate's conventional police tactics have no effect on the spirit world. Strikes come from anytime, anywhere, and from random, unwittingly manipulated people. Behind it all is a deal the assassin had made with the devil: send Kaitlyn Spencer to an early grave in exchange for a fresh start. For that, the assassin will stop at nothing to uphold his end of an Unholy Bargain.

Author Bio
Travis Hallden Holt is a former U.S. Navy surface warfare officer and veteran of the Persian Gulf War. He's worked the past twenty-two years in the corrections side of law enforcement, first in the prison system, then in the streets as a probation officer. He spent three years supervising felons in a south Atlanta neighborhood ranked the ninth most dangerous neighborhood in America, where one in every twelve residents becomes a victim of crime each year.
For years, his interests were in weaponry (both small arms and large scale), warfare tactics, hand-to-hand combat, criminal justice and unsolved crimes. But life has a way of molding perspectives, and Travis came to realize the physical world known to the five senses didn't have all the answers. It scratched the surface at best. Accordingly, Travis's interests shifted to supernatural phenomenon, spirituality, the mysteries of life, the invisible world beyond our five senses and the forces that lie therein. He's still a peace officer, but one who has mingled with psychics, mystics, mediums, energy healers, shamans, gurus, artists and denizens of the "underground."
Travis is the author of Unholy Bargain, a supernatural thriller published by Blood Moon Publishing. He resides in Atlanta, GA.

Albert “Chino” Alverez and Nate Barrington weaved their way on foot through rows of cars in a supermarket parking lot. Beyond the cars, on asphalt rarely touched by traffic, where the oil stains were almost non-existent, an Escalade waited with three men inside. The men watched Nate intently.
“Hey, what’s up?” Chino greeted the driver and reached for a knuckle tap.
The driver remained in the vehicle, and failed to respond in kind. He was a thug nicknamed J-Ball, and he hooked a thumb toward Nate. “So, this is the dude?”
Chino nodded.
“Watcha gonna do with a key of blow?” J-Ball asked Nate. A gnawed toothpick jutted from the side of his mouth.
“Step on it and sell it, man. What else?” Nate said.
“Shit. It’s already been stepped on more times than a doormat.” J-Ball snickered and exposed a row of gold teeth. He looked in the rearview mirror and adjusted his Toronto Blue Jays ball cap so that it rode cockeyed.
“I just need to pay my bills like anyone else,” Nate said. “Not everyone can throw cash down on an Escalade.”
“How is it you can throw cash down for a key?” J-Ball asked.
“Investments. I have to make money. I owe people.”
A smile crept into J-Ball’s eyes and tugged the corners of his mouth. “How come we haven’t seen you around before?”
“Because I used to get my product from Fast Eddie,” Nate said. “Up until he was shot in the head.”
“Ain’t our problem.”
“Look,” Nate said impatiently, “you have product to sell; I have money. Can we do business or not?” He scanned his surroundings from behind mirrored sunglasses, remaining as furtive as possible. The north end of the parking lot wasn’t as secluded as he had wanted. A few cars sprinkled the area. A blue Ford Mustang pulled up fifty feet away and parked in one of the few shaded spots amid the two-acre stretch of asphalt. Nate cocked his head to get a look at the driver. The movement was noticed.
“Homey seems a little jumpy. Where did you find this cracker?” the front passenger asked Chino in accusatory tones, drawing a round of suspicious glares directed at Nate. Sculptured facial hair framed the passenger’s face in intricate lines, but the shape of his head was too square, and the beard made it even more so. Nate resisted the urge to call him “Boxhead.”
“You should know better than bringing someone new, Chino,” J-Ball said.
“Listen, man, he’s clean. I’ve been doing business with you a long time and I’ve never screwed you. Not once,” Chino said.
“And you better keep it that way. There’s no where you can hide that I can’t find you.”
“I’m telling ya, man, we’re all straight. I’m vouching for him,” Chino said. Years of complicity in the drug trade had forged deep furrows in Chino’s brow—always looking in the rearview, never knowing whom to trust, on the razor's edge of facing jail time or the barrel of a gun. Under duress in the noontime sun, they formed trenches deep enough to plant corn seed.
J-Ball’s mouth soured. The man in the back seat mumbled something inaudible. Nate shifted unobtrusively to get a better look at the dude, but with the rear windows tinted and the driver blocking much of the view into the back of the Escalade, there was little to see.
“Now that I think about it, I haven’t seen you around in awhile. Where ya been, Chino?” J-Ball said.
“You know how it goes. Gotta go where the work is. My cousin in Miami’s got a car detailing business. Took a job with him, but the work dried up after awhile. People with money started washing their own cars.” Chino shot a nervous chuckle. “Tough times all over, man, ya know?”
Sun pounded the shadeless lot from above, and a sweltering layer of heat radiated up from the blacktop. The man who had parked in the shade was watching them. Nate wondered if he’d been made. “You fellas can get reacquainted on your own time. Who was the idiot who thought of this parking lot for a deal?”
The thugs looked at Nate as if he had pissed on the side of their Escalade.
“What the hell you talking about, jackass?” J-Ball said.
“Take a look around you. See the dude sitting in the car under the tree? Is he one of yours?”
Four pairs of eyes panned over to the left. When Boxhead leaned out his window for a better view, the last of Nate’s patience evaporated in the heat. The deal was going nowhere. Not today. “Shit! You’re all pathetic.”
J-Ball’s lips pressed thin and his jaw flexed. He pulled the toothpick from his mouth and pointed it at Nate’s face. “You know what I think? I think cracker-ass here is too spooky, like a little girl, or like a cop. You a cop, cracker?”
“Give me a break, man. I’ve done time because of dealing in places like this. Cops love it. Out in the open, they can watch from anywhere,” Nate said. “A trip to jail cuz you’re sloppy isn’t how I want to spend the rest of my day.”