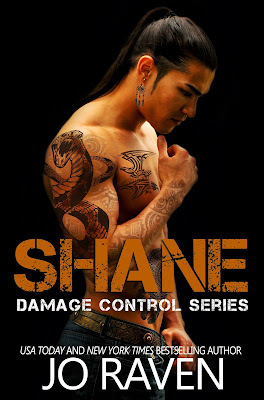 Once upon a time, my life was good. I had a family, I had a girlfriend, and hopes for the future. That was long ago, but I remember it. A hazy dream of what could have been.That’s gone now. I lost it all. Life fucked me over, and now I’m scared of my own damn shadow. I’m training to be a tattoo artist, but I bet I’m not good enough. I have a roof over my head, but every morning I’m scared shitless that I’ll find myself on the street again – or worse, back in prison. And every time a pretty girl looks at me, every single fucking time, I know I can’t be with her. Not only because she’ll find out I’m an ex-con and run the other way, no. It’s more than that. I just can’t. The thought of anyone touching me, the thought of getting aroused from that touch brings back every damn nightmare from my past to swallow me whole.Can’t fucking do it. Not even if it’s the prettiest girl on earth – Cassie. With her long blond hair and her pretty tits, her short skirts and high heels, she’s all my fantasies rolled into one. See, the fact she kissed one of my buddies? That’s good. The fact she looks at me like I’m a bug under her shoe? Even better.Because it means she’s not interested in getting hot and sweaty with me, and that I can keep living that fantasy.The fantasy that she wants to be with me as much as I want to be with her – even though I know it will never happen.Standalone novel. No cliffhanger.*Warning: this book contains graphic language, sex, and violence. Mature readers only. Not intended for young readers.*SHANE is book 4 in the series Damage Control - a series set in the same world as Inked Brotherhood. The boys of Damage Control were taken in by Zane Madden and Rafe Vestri and offered apprenticeship and work in the tattoo shop Damage Control.Next in the Damage Control series: OCEAN (Damage Control 5)

Shane is holding me, his large, callused hands on my cheeks, and then his mouth descends on mine, and he’s kissing me. His mouth is hard and hot, tasting of whisky and fire, and I’m lost against him.
He just holds me close, moving his mouth over mine. He groans when I lick his lips, letting me in. His tongue tangles with mine, and the fire spills from my mouth to my belly, setting me alight. He kisses like someone who hasn’t done it much—a little hard, a little awkward.
Perfect.
Because it’s him, it’s Shane, and the cool silk of his long hair brushes against my face as he kisses me, his tall, strong body close enough to touch if he’ll just take one small step forward. If he’ll let me close the gap and press myself to him.
He doesn’t. Even as I loop my arms around his neck, tugging, his hands on my face are like steel vises, keeping me in place, just near enough for our mouths to meet and the most scorching kiss I’ve ever been given.
Shane wants me. He wants me. The words spin in my mind in colorful, dizzying circles. I mean, he’s kissing me. Would he kiss me if he didn’t? Why won’t he let me close?
His teeth nip at my lips, making me gasp, sending jolts of fire into my core, and he walks me backward until my back hits the wall with a thump. I love all of it, love the feel of his mouth on mine, the strength in his hands, the way I have to strain upward to meet his mouth because he’s so tall. I’m so caught in the sensations that I jerk when he moves closer.
He’s breathing raggedly against my mouth. He finally crushes his body to mine, pressing me to the wall, letting me feel how aroused he is. His hard-on is long and thick, digging into my belly.
Damn, this boy’s so hot I could come just from that.
But then his grip on my jaw turns so hard it hurts. I whimper, and he stops moving, every muscle turned to stone, his mouth just pressed to mine as he pants.
Why? No, I don’t want him to stop. I like how hard he’s gripping me, how he’s bearing on me until I can feel every ridge of every muscle through our thick clothes. That he’s holding me like he’ll drown if he lets go, like he’s losing control from wanting me so much.
I want to feel that wanted. That needed. No one has ever reacted that way with me—and there’s never been anyone I’ve wanted so much. Liked so much.
My arms are still wrapped around his neck, the silk of his hair tickling my fingers, and I try to pull him closer. I let my hands slip over his powerful shoulders, down his sides, to the front of his pants, stroke over the big bulge there.
There’s the proof that he likes what we’re doing. His dick can’t lie, right?
I kiss his lips, willing him to kiss me back, to touch me more.
But he’s already pulling away, releasing my cheeks, ripping himself from my hold, his eyes wide and wild.
“Fuck,” he breathes and stumbles back. “Fuck, I’m sorry.” 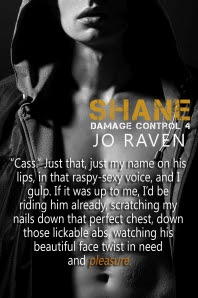 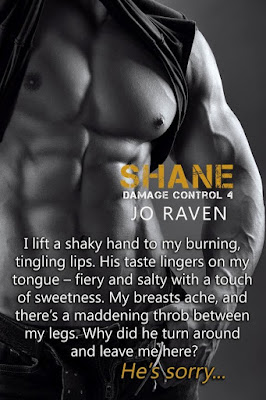 ( Remove if not reviewing )

Jo Raven is a New York Times and USA Today bestselling author, best known for her series Inked Brotherhood and Damage Control. She writes edgy, contemporary New Adult romance with sexy bad boys and strong-willed heroines. She writes about MME fighters and tattoo artists, dark pasts that bleed into the present, loyalty and raw emotion. Add to that breathtaking suspense, super-hot sex scenes and a happy ending, and you have a Jo Raven® story.

Find all her books here .
Be the first to get your hands on Jo Raven’s new releases & offers, giveaways, previews, and more by signing up here
Meet Jo Raven online – on Facebook
chat with her on Twitter (@AuthorJoRaven)