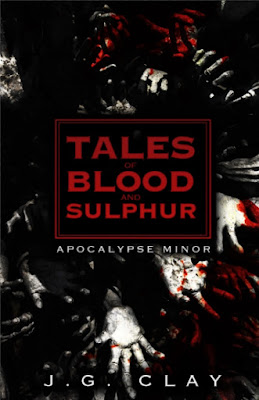 
Eleven Tales steeped in Blood and reeking of Sulphur

J.G Clay takes you on a journey through the voids of Reality and into dark places where demons, mutants and inter-dimensional creatures taunt, taint and corrupt Humanity. Survival is not guaranteed, sanity is not assured and death lurks in every corner. These are the Tales of Blood and Sulphur: Apocalypse Minor; eleven twisted tales of terror and mayhem……

There are cracks in the skin of Reality. Some are microscopic, others are as wide as a four-lane motorway. As the fault lines increase and widen, the door to our world shines like a beacon in the darkness, a warm and inviting sight to others beyond our understanding. When They cross over into our realm, The Tales begin......

A gambler taking one last desperate throw of the dice. A struggling writer making an unholy alliance. An eternal being fighting to stay alive in the financial capital of India. A man burdened with a terrible town secret. The Law Enforcers who must never cry. The End of Days live and direct from the rural heartland of England.

The blood is warm, the sulphur is burning, the tales will be told, the Apocalypse Minor is imminent! 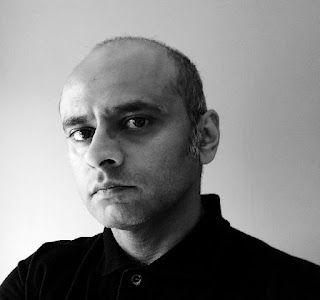 J.G Clay is definitely a Man of Horror. There can be no doubt. Putting aside the reverence he has for the horror greats, such as King, Barker, Herbert, Carpenter, Romero and Argento, there is another fact that defines his claim for the title of the 'Duke of Spook'. He was born on Halloween night. By a quirk fate, it was also a full moon that night. Co-incidence?
Here at Clay Towers, we don't believe in coincidences.

The 41 year old hails from the Midlands in the United Kingdom, is married with one step child and two dogs that bear a strong resemblance to Ewoks. Beyond the page and the written word, he is music mad and can hold down a tune on a bass guitar pretty well. He is an avid reader and also has an enduring love of British sci-fi, from the pages of the '2000A.D' comic to the televised wanderings of Gallifrey's most famous physician. Clay is also a long-time fan of the mighty Birmingham City Football Club and endures a lot of flak from his friends for it.

Describe your books in 3 words?

If you could be any character from one of your books who would it be?
Fortuna Devoratum, The Eater of Luck. He’s a suave sardonic gambling demon with a penchant for snarky quips.

What is your greatest fear about being an author/publishing your book(s)?
Not getting a large audience. Let’s be honest, most authors want a huge readership, even the ones who protest and say ‘it’s all about the love’.

Would the 10 year-old version of yourself kick your butt or praise you for what you've accomplished in life?
Probably kick my butt for wasting so much time and putting things off. I was, and still am to a certain degree, a huge procrastinator.

What do you do when you finish your book and turn it in to the editor?
Write a short story or novella just to clear the novel from my system, then hurtle back into the land of the novel. I can’t stay away for too long. I get the jitters.

What is your favorite Genre and why?
Horror. It’s enthralled me ever since I was a child. Being born on Halloween might have something to do with that.

What is one thing that would surprise us to know about you?
I don’t like heavy metal. Or goth music, come to think of it. Many people have this perception of horror authors as these gloomy people who listen to that kind of stuff. Not me though.

Was there an Author who inspired you to write?
Stephen King. The first slice of printed horror I read came from that man. I haven’t looked back since.

How did you come up with the characters in your books?
Most of them are composites of people I know. I never base a character solely on one person, just in case I get something wrong. It’s far better to use aspects of character, that way you have a ‘get out clause’.

Do you prefer to write alone or do you like to collaborate with other authors?
I haven’t collaborated with anyone as yet so I couldn’t answer that question. I’d be interested to find out the answer though.

Everyone uses computers, tablets, phones and no one uses handwritten form or typewriters, what do you prefer to use?
These days, computers. They make the whole writing process much more easier.

Is there a ritual you do everything before you begin your book?
None at all. Other than stare at the blank screen in abject fear.