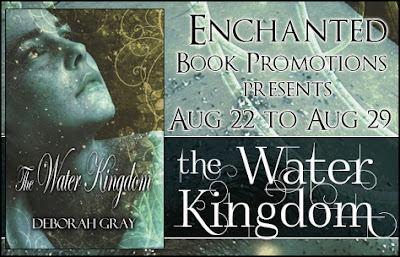 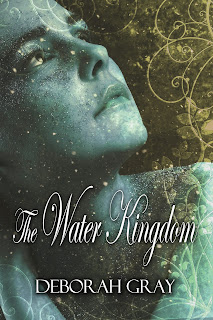 Title: The Water Kingdom
Author: Deborah Gray
Genre: YA Paranormal Romance
For seventeen-year-old Nell, life is about to take a chilling turn. Raised by a workaholic uncle and used to being over looked in a crowd, Nell has found life to be rather dull and uneventful…Until the day of a school field trip out to White Shell Lagoon. Going against her nature, Nell bends a rule – and makes a shocking discovery.
Now she has a secret that no one will believe, one that whispers danger even as it seems to call to her very soul. What really lurks beneath the glassy waves… and how much will finding out cost her?
All she knows is that she’s caught the attention of a strange boy with special abilities and violet eyes, a boy she is certain cannot be human.
Trapped by rules and tradition in a deteriorating kingdom, Sebastian feels he has no other choice except to act. Taking matters, and fate, into his own hands, the daring young man enters the realm of humans to retrieve what was once taken. The land beyond the waves is no friend to his kind, yet to save his home, he will do what few before him have ever dared. He is prepared for almost anything… except meeting a girl who somehow poses a threat to his identity, his hidden world and to everything he has ever known.
As the two fight for their own agendas it becomes clear that they may just have more in common than either realizes…
The Water Novels - Book One

I STAND ON THE edge, gearing up for what is to come. My fists clench when I look down into the steep darkness. The ledge beneath me is overgrown with damp weeds and moss, the exterior crumbling and rough compared to the manicured grounds I’m used to. It is the last place anyone would think to look for me.
I unbutton my fitted military style jacket, fingers catching on the gold buttons of the high collar. Engraved on each one is the royal emblem. I do not wish to see it right now, but I can feel the raised curve of an anchor.
A hiss escapes my throat as I think about what I am about to do. Is it brave or stupid? I settle for brave.
I will leave everyone I have ever known behind. I pray they will forgive me, or at the very least understand. Admittedly, I am about to perform an atrocious act. If there was another way, I would not commit or even conceive of it.
I place the jacket carefully on the ground. As soon as it is found they will know what I have done, but by then it will be too late. Bile rises in my throat at the thought.
When I come to the shirt beneath, I pull it over my shoulders and throw it into a heap as if shedding a nightmare. A piece of rock comes away from the platform and tumbles over the edge. It falls so far that I can’t hear it hit the bottom.
Rays of light reach the horizon, and the blazing embers remind me that soon everyone I know will wake and start their mornings. I allow a few seconds to relish the moisture of the air, the still quiet, the balmy and ever-present scent of salt.
A voice inside reasons for me to turn back and abandon the plan. I consider the previous fifteen years, each worse than the last, everyone busying themselves in avoidance of the looming dilemma while hoping for a miracle. The inaction is fruitless.
I stare down at the well of darkness before me and ask myself the same questions others are likely to think in my position. Will the process be quick? Will it hurt terribly? Most importantly, what awaits on the other side?
Although my knowledge is limited, taking the risk is the only solution I can find. Dormancy, death… there is little difference between the two at present. The drop is centimeters away; it would take two steps at most, two steps into the unknown. My pulse beats steadily and I take a breath. I’ve come too far to go back on my decision. One foot in front of the other, I walk with a strange calmness. Then I simply do it – I jump from the edge.

Author Bio
Deborah Gray holds a Bachelor of Teaching and Learning degree and writes for enjoyment. "The Water Kingdom" is her first full length novel for young adults in the fantasy genre.

She is a member of the Christchurch Writers' Guild and currently lives in New Zealand with her husband, family and a mischievous black Labrador.