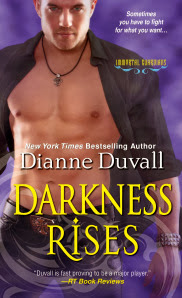 TITLE: Darkness Rises
SERIES: Immortal Guardians #4
AUTHOR: Dianne Duvall
GENRE: Paranormal Romance
RELEASE DATE: October 1, 2013
PUBLISHER: Zebra
ISBN: 1420129783
“Duvall does an outstanding job building both a rich world and a compelling cast of characters.” — 4.5 stars, RT Book Reviews
BLURB:
Dianne Duvall returns to the world of the Immortal Guardians, where danger—and desire—make every decision count. . .
Krysta is used to getting the drop on vampires. Her “special abilities” aren’t much, but the plan is simple—she plays helpless pretty young thing to lure them in. Then her shoto swords come out and it’s bye-bye, bloodsucker. Until one night she finds herself with an unexpected ally. He’s a vampire, all right, but different. Mysterious. Handsome. And more interested in saving her skin than draining it.
Étienne has been an Immortal Guardian for two hundred years—long enough to know that Krysta is special. He can’t stop thinking about her long legs, even more than her short swords. Then he discovers the vamps she’s exterminating have friends in high places, and the Guardians are in danger too. He’ll have to accept Krysta’s help to save them. The stakes for a mortal are high. But the cost to his heart might be higher. . .
Buy Links:
Amazon http://www.amazon.com/gp/product/1420129783/ref=as_li_tf_tl?ie=UTF8&camp=1789&creative=9325&creativeASIN=1420129783&linkCode=as2&tag=dianduva-20
Kindle http://www.amazon.com/gp/product/B00CICDD3Y/ref=as_li_tf_tl?ie=UTF8&camp=1789&creative=9325&creativeASIN=B00CICDD3Y&linkCode=as2&tag=dianduva-20
Barnes and Noble http://www.barnesandnoble.com/w/darkness-rises-dianne-duvall/1115388762?ean=9781420129786
Nook http://www.barnesandnoble.com/w/darkness-rises-dianne-duvall/1115388762?ean=9781420129793

Author Bio:
Dianne Duvall is the New York Times and USA Today Bestselling Author of the Immortal Guardians paranormal romance series. Her debut novel DARKNESS DAWNS was nominated for the RT Reviewers’ Choice Award for Best Vampire Romance. NIGHT REIGNS, Book 2 in the series, was declared an “utterly addictive” Top Pick by RT Book Reviews. PHANTOM SHADOWS, Book 3, was deemed a Top Pick by both The Romance Reviews and by Night Owl Reviews. Her Immortal Guardians novella “In Still Darkness”, published in the PREDATORY anthology, was praised by Publishers Weekly for its “rich characterizations and kick-butt action.” Dianne loves all things creative. When she isn’t writing, Dianne is active in the independent film industry and once even appeared onscreen as a machete-wielding maniac not unlike the vampires she so loves to create in her novels.

Favorite Lines Are you afraid?
No need to share all of our secrets at once.
We can do anything as long as were together
Because I think Krysta has lost her damned mind
As always the Immortal Guardians give me EXACTLY what I need! I was feeling kinda just blah and then I dove into this book and it had me smiling in minutes! Etienne oh he is such a fabulous man! I have been waiting for his story and OH HE'S BEEN PAIRED WITH THE PERFECT WARRIOR WOMAN!
Krysta is a vampire hunter! (Perfect right?) she's been doing it with her brother for 6 years when she runes across Etienne! He's captivated by her and once she gets past the fact he's immortal and not vampire things click. Just in time to because those mercenaries are back. The are going after all vampires and immortal alike, they don't mind shooting Krysta either! It's getting so bad that they are even working with some vampires that weren't part of Bastian's group.
It's filled with fun, yummy, action packed amazingness! All I need to say is I WANT A IMMORTAL GUARDIAN OF MY OWN! 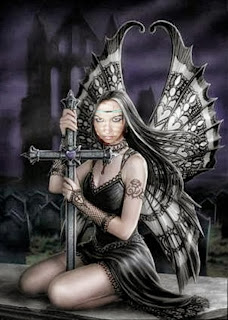